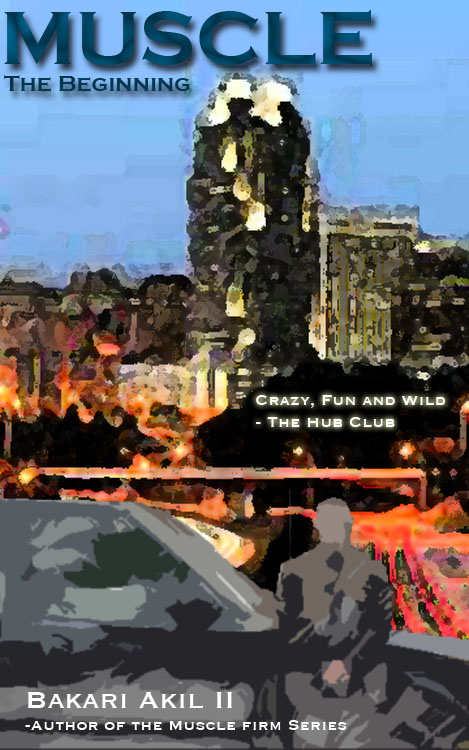 Hey guys, this is the prequel to my MUSCLE Firm Short Story Series, a quick, fast paced, action adventure comedy. If you like it, pass this link to everyone you think would like it. Thanks!!!

ALL RIGHTS RESERVED. No part of this report may be reproduced or transmitted in any form whatsoever, electronic, or mechanical, including photocopying, recording, or by any informational storage or retrieval system without express written, dated and signed permission from the author.

Manufactured in the United States of America

To people who love excitement and adventure!

Other books in The MUSCLE Firm Series

“He’s here,” were the words Muscle heard through his earpiece. As he peered from his encampment behind the bushes, sure enough, the man in question was walking toward the house. His pace was deliberate and he looked intense. This guy was nothing but trouble.

“The nerve of this dude! Balls of steel,” said Bell, who was positioned in the Blue Ford Edge with tinted windows, two houses down. The man they were watching had the look of a person that felt he belonged, and he acted as if he owned the place. But that was far from the truth.

Yes, he once owned the house, six months ago. But now his ex-wife inhabited the home with their two small children and occasionally, her new boyfriend or what some single mothers refer to as a “a friend” or “your uncle.” No matter who was seeing whom now, the client was inside and that is why Muscle and Bell were here.

The man walked past the long row of bushes where Muscle crouched and headed for the huge front window that occupied the center of the house. He knelt down and tried to look through the brown plantation shutters that were meant to keep outsiders from peering in and not suited for the aims of ‘peeping Toms.’

It was time to move!

Bell had already left the car and began heading to the house. Muscle stood up and left his vantage point from behind the bushes.

They approached the kneeling man from the side as he strained to see through the glass. Dressed in black pants, a black hooded sweatshirt and dark boots; something about the way he acted signaled deadly intent.

Wilkerson tried to jump up, but as he rose, Muscle kicked the back of his leg between his thigh and calf. His head hit the wall as he crashed back to his knees. Wilkerson was quick though. Unfazed, he pushed away from the house and rolled backwards on the ground until he was able to jump to his feet.

“Awesome!” was all Muscle could think as he watched the stalker perform his acrobatics. He snapped back to reality when he saw the absolute look of calm in the guy’s eyes. Wilkerson took a step toward Muscle when, out of nowhere, a loud whistle rang out behind him. He stopped in his tracks and quickly spun to his left so he could keep an eye on Muscle and whoever whistled at him from behind.

It didn’t matter though. Bell was already in the air and had a big smile on his face. He used a body scissor kick to bring Wilkerson down to his back. In an instant, the two…

MUSCLE – The Beginning can be found on Amazon. MUSCLE – The Case of Cheating Security Guard, the next story in The MUSCLE Firm Series is also available.

For my readers at Jiujitsu365, if you like this story, please leave a review at  Amazon, Barnes & Noble, Smashwords or iTunes if you purchase it.

Check out my grappling books on Amazon: Tapmonster: Ideas about Grappling for BJJ and Submission Wrestlers, Grappling for Newbies, 20 Ways to Increase Grappling Skills off the Mat, The Lazy Man’s Guide to Grappling and much more.